You Will Feel The Heat

31K ratings
Currently Out of Stock: We'll get more as soon as possible
Notify Me When Available
Add to Wishlist
Format:  DVD
item number:  W62Y
Also released as:
The Postman Always Rings Twice (Blu-ray) for $18.70
Our customers love us! 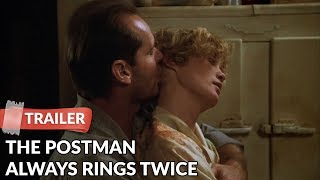 Bob Rafelson's THE POSTMAN ALWAYS RINGS TWICE features a gorgeous young wife, a dull older husband, and a sexy drifter--perfect noir ingredients in a recipe for murder. While hitchhiking his way to Los Angeles during the depression, Frank Chambers (Jack Nicholson) stops at a small roadside café where he meets the beautiful Cora (Jessica Lange). He decides to stick around, taking her husband, Nick (John Colicos), up on his offer of a job; but Frank and Cora very quickly decide that they'd rather not have Nick around. With its high-voltage cast, screenwriter (playwright David Mamet), and cinematographer (Sven Nykvist, who previously worked with Ingmar Bergman), Rafelson's adaptation of James M. Cain's novel has the makings of an engaging thriller. The novel had previously been filmed by director Tay Garnett for his 1946 movie, starring Lana Turner and John Garfield; this version reveals Rafelson's desire to remake the classic without the censorship constraints of the former era. The film also features Anjelica Huston, who was romantically involved with Nicholson at the time.

Set during the depression, Bob Rafelson's film concerns Nick, an older man, and Cora, his attractive young wife, who take on a drifter named Frank as an employee at their roadside cafe. Soon Cora and Frank develop lustful feelings for each other, and their passions grow until they plan a new life together--one beginning with her husband's murder.