What would you do if you lost everything? 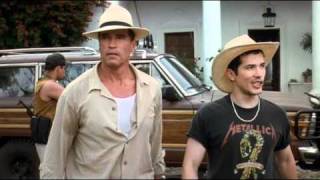 Arnold Schwarzenegger stars as a lone Los Angeles fireman whose wife and child are killed by a terrorist bomb in this eerily prescient action drama. Vowing revenge against the Columbian guerilla leader who set the bomb, Gordy Brewer (Schwarzenegger) heads down to Central America where he is soon caught in a crossfire between the terrorists and a cadre of CIA operatives led by hard-nosed agent Peter Brandt (Elias Koteas). Escaping prisons, diving off waterfalls, and biting off ears, Gordy seems unstoppable until he realizes his target has a wife and child of his own, and moral confusion sets in. Action fans expecting typical brainless mayhem might be surprised to find emoting, ethical dilemmas and criticism of US foreign policy in an Arnold vehicle, but they needn't worry: he still finds time for plenty of bone-breaking and blowing things up before the credits roll. Gorgeous Italian actress Francesca Neri (LIVE FLESH) is a major asset as the terrorist's wife. Andrew Davis (THE FUGITIVE) directed the film. Though it has nothing to do with the actual terrorist attack on America or political events in the Middle East, this film's mix of firemen, grief, and terrorism may still strike a sensitive nerve in some viewers.