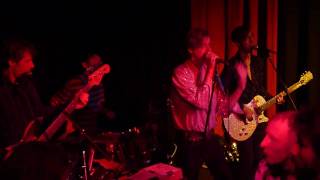 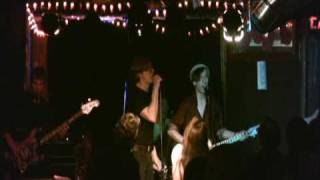 The Fleshtones : I Want The Answers (Music Video)

"Their single-mindedness pays off once again on this stompingly satisfying set." - Grade: B plus

The Fleshtones: Keith Streng (guitars); Peter Zaremba (harmonica); Bill Milhizer, Ken Fox (background vocals).
Personnel: Keith Streng (vocals, guitar); Peter Zaremba (vocals, keyboards); Bill Milhizer (drums, percussion); Ken Fox (background vocals).
Additional personnel: Jim Diamond , Rick Miller (guitar).
Liner Note Author: Sir Lamprey Leech.
While 2003's Do You Swing? was strong enough to convince any doubters that the Fleshtones were still firing on all cylinders after cranking out the "Super Rock" since 1976, 2005's Beachhead goes that fine album one better -- Beachhead not only matches it for great songs, but actually rocks out with greater muscle and ‚lan. Six of Beachhead's 11 songs were recorded with nuevo-garage kingpin Jim Diamond at his Ghetto Recorders studio in Detroit, while the remainder of the disc was produced by Rick Miller of Southern Culture on the Skids at his Kudzu Ranch facilities, and the tag-team production seems to have been a shrewd choice -- Miller's recordings boast a bit more production police and nuance, while Diamond captured the Fleshtones while they were fired up and rocking hard, and when you put it all together one gets the best of both worlds. (Though Diamond was behind the board for the moody closer, "Late September Moon," and Miller recorded the rollicking "Push Up Man," proving neither man's skills are mutually exclusive.) If Peter Zaremba's voice isn't as smooth as it once was, he's still plenty commanding, and the rest of the band -- Keith Streng on guitar, Ken Fox on bass, and Bill Milhizer at the drums -- sound sharp, powerful, and muscular without losing touch with the smarts and sense of fun that always made this band a hit at social gatherings. And the opening hat trick of "Bigger and Better," "Serious," and "Pretty Pretty Pretty" shows these guys still have the hooks, the riffs, and the gift of gab firmly at their command -- the Fleshtones haven't stopped writing cool songs and playing them right, and Beachhead is one solid blast of Super Rock thunder that will get the party started. ~ Mark Deming

50%off
The Fleshtones
Stocking Stuffer
$5
Add to Cart
(3)

The Fleshtones
Face of the Screaming Werewolf
$16.20 Super Savings
Add to Cart