It's good to be King. 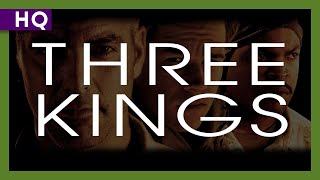 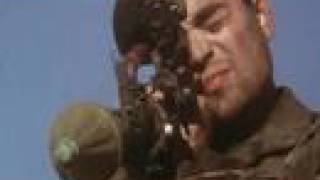 While high-tech U.S. specialists fought, career soldier Archie Gates marked time in his Gulf War base camp. But now it's time for action. Gates and three other restless Americans decide to raid a bunker holding a stash of gold stolen by the Iraqi army. Get in, get out, get rich, be back in time for lunch: the plan couldn't be easier. George Clooney portrays Gates, Mark Wahlberg, Ice Cube and Spike Jonze are his fellow commandos and Nora Dunn plays an ambitious TV newswoman in this acclaimed film that by turns is a war movie, an antiwar movie, a surreal comedy and a powerful drama of human compassion - all written and directed with exhilarating style by David O. Russell. From start to finish, "Three Kings rules" (Susan Wloszczyna, USA Today).

David O. Russell makes his entry into the major studio big leagues with the electric war dramedy THREE KINGS. The politically charged script, based on a fictional story by John Ridley, is a sly reworking of KELLY'S HEROES, and concerns four Gulf War soldiers who discover a map that may lead to an enormous stash of gold bullion. Russell gives actors George Clooney, Mark Wahlberg, Ice Cube, and Spike Jonze a chance to shine, in roles that step outside the usual cinematic clichés and enable them to create human, believable characters, resulting in one of 1999's most exciting, original, and underrated motion pictures.

David O. Russell's multifaceted war film is an exhilarating display of cinematic bravado. As the Gulf War winds to a close, three American soldiers discover a map that leads to a stash of gold bullion hidden in a bunker by Sadaam Hussein's army. The soldiers--Sgt. Troy Barlow (Mark Wahlberg), "Chief" Elgin (Ice Cube), and Pvt. Conrad Vig (Spike Jonze)--are busted by Special Forces Sgt. Major Archie Gates (George Clooney). Gates orders a top-secret mission in which the four of them will track down the gold and keep it for themselves. Their journey seems simple enough, as Hussein's troops ignore the Americans due to the recently called truce. But after securing the gold, they witness the execution of an Iraqi woman in front of her family. Their morality compels them to fight for what is right, risking their lives--and the gold--in the process. Working within the limitations of the war genre, Russell manages to reinvent and revitalize it by shooting the film with a bleached out look and hyper-kinetic editing style. He also stuffs it with a potent blend of comedy and drama that is reminiscent of Robert Altman's M*A*S*H, only he updates it for the materialistic 1990s.

18%off
Anchorman: The Legend of Ron Burgundy (Blu-ray)
$10.60 Super Savings
Add to Cart