World War II is over. A new war begins. Inside occupied Germany, neo-Nazi insurgents wage a campaign of terror aimed at undermining the American Military Government. 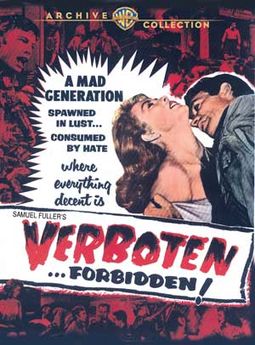 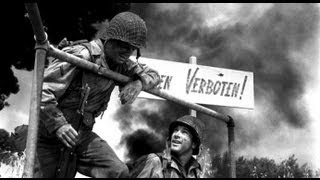 World War II is over. A new war begins. Inside occupied Germany, neo-Nazi insurgents wage a campaign of terror aimed at undermining the American Military Government. Among those experiencing the waves of violence is an ex-G.I. (James Best) married to a Fraulein (Susan Cummings) he met when U.S. forces fought their way into the town of Rothbach. "I felt like a chef making a hardy soup - blending together postwar Germany, Beethoven, Wagner, unrepentant Nazis and the Nuremberg war trials," filmmaker and combat vet Samuel Fuller (The Big Red One) recalled about Verboten! Fuller seasons his soup with soul-searing documentary footage from his own war-era archives. It's an assertive and thought-provoking celluloid dish.

Director Samuel Fuller skillfully intercuts footage of the German death camps with scenes from this thought-provoking drama about a forbidden, post-war love affair. David (James Best) is a G.I. stationed in Germany with the American Military Government. He falls in love with Helga (Susan Cummings), a young German woman, and she reciprocates his feelings. But their romance is not condoned by either culture and made all the more difficult because a troublesome gang of neo-Nazis is on the rampage, killing, stealing, and helping war criminals evade capture. Helga's younger brother is a member of the gang who suddenly breaks down when he attends the Nuremburg trials and sees footage on the death camps. That changes his mind and he is ready to help the American military, and maybe the relationship between his sister and David as well.

Romance | Terrorism | War | Marriage | Nazis | Germany | Brothers | Romances | Terrorists | Soldiers | Love | America
This product is made-on-demand by the manufacturer using DVD-R recordable media. Almost all DVD players can play DVD-Rs (except for some older models made before 2000) - please consult your owner's manual for formats compatible with your player. These DVD-Rs may not play on all computers or DVD player/recorders. To address this, the manufacturer recommends viewing this product on a DVD player that does not have recording capability.