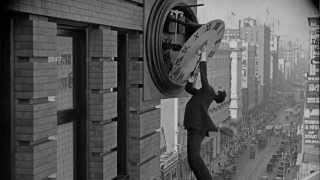 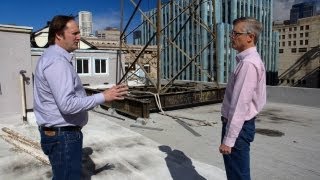 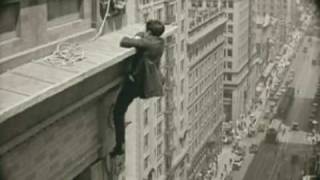 Harold leaves his fiancée Mildred behind to make it in the big city. Despite his best efforts, he is unable to find anything better than working as a lowly clerk at DeVore's department store. Harold still sends Mildred expensive gifts in spite of the meager salary, and hopes to save up enough money to marry her. When DeVore's manager offers a $1,000 prize to anyone who can attract an enormous crowd to the store, Harold convinces his acrobatic roommate Bill to scale the store's 12-story facade for half the prize money. On the day of the event, Bill finds himself in trouble with the police and unable to attend. Now a petrified Harold has to climb those 12 stories all by himself...or kiss the money (and Mildred) goodbye!

Safety Last! is widely considered Harold Lloyd's best film, mainly for its astounding concluding stunt: Lloyd scaling the side of a 12-story high building, eventually hanging for dear life from the hands of a giant clock. Harold told historian Kevin Brownlow that he was inspired after seeing "human fly" Bill Strothers climb the Brockman Building in Los Angeles. Always looking for exciting gimmicks to put into his films, Lloyd signed the steeplejack to a contract, but while Harold was writing the scenario, Strothers broke his leg. So, much like in the story of Safety Last!, Harold had to perform the closing death-defying feat by himself (Strothers was originally supposed to double for him.) Harold had only mattresses on the ground waiting to break his fall if he slipped. Later, a dummy was thrown from the building and bounced off the mattresses onto the street, showing that Lloyd had been in real danger. Modern sources indicate that the stunt may not have been quite as dangerous as it looked - After Lloyd's death, stuntman Harvey Parry revealed that Harold had actually climbed a fake facade constructed on a rooftop, and that he had doubled for the comedian during the long shots in which the street below was visible. Despite this, the illusion is just as convincing today as it was in 1923, proving once again that Harold Lloyd is the "Third Genius" of silent comedy after Chaplin and Keaton.

25%off
Sexpots From Space Double Feature: Voyage To The Planet of... TOP 25 Bestselling DVD
$5.95 Spring Sale
Add to Cart
(70+)
Film Collectors & Archivists: Alpha Video is actively looking for rare and unusual pre-1943 motion pictures, in good condition, from Monogram, PRC, Tiffany, Chesterfield, and other independent studios for release on DVD. We are also interested in TV shows from the early 1950s. Share your passion for films with a large audience. Let us know what you have.
How to Order
Shipping Rates & Options
International Shipping
Return Policy
Request a FREE Catalog
Order Items by Catalog
View Catalogs Online
Safe Shopping Guarantee
Buy a Gift Certificate
About OLDIES.com
Customer Reviews
Contact Info
Privacy Policy
Send Feedback
Login
Forgot Password?
Sign Out
Email Subscriptions
Redeem Gift Certificate
To contact customer service, email us at Customer-Service@OLDIES.com
Closed for COVID-19
Portions of this page © 2020 TiVo Corporation. For personal non-commercial use only. All rights reserved.
All copyrights, trademarks, and logos are owned by their respective owners. Rotten Tomatoes content and Certified Fresh™ Logo is Copyright © Fandango. All rights reserved.
© 2020 OLDIES.com and its affiliates and partner companies. All rights reserved.