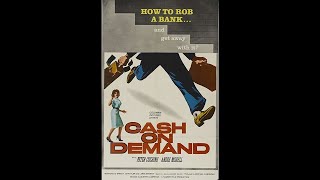 It's December 23rd at the City and Colonial Bank, and the staff is preparing for their annual Christmas party. Harry Fordyce (Peter Cushing), the fastidious and exacting bank manager, welcomes in the bank's insurance company detective, Hepburn (Andre Morell), to check out the security. It turns out, however, that Hepburn is not working for the bank, but robbing it, and he is holding Fordyce's family hostage. The bank employees become suspicious, but Fordyce, worrying about his family, does not want them to react.

Betrayal | Melodrama | Parenthood | Crime | Kidnapping | Families | Parents
This product is made-on-demand by the manufacturer using DVD-R recordable media. Almost all DVD players can play DVD-Rs (except for some older models made before 2000) - please consult your owner's manual for formats compatible with your player. These DVD-Rs may not play on all computers or DVD player/recorders. To address this, the manufacturer recommends viewing this product on a DVD player that does not have recording capability.