X: The Man with the X-Ray Eyes (Blu-ray)

Suddenly he could see through clothes, flesh… and walls! 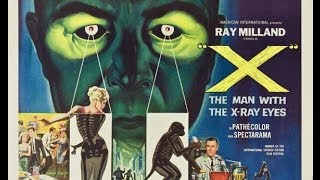 X: The Man with the X-Ray Eyes (Trailer)

Ray Milland stars in this visionary sci-fi film as Xavier, a doctor who gains the power to see through solid objects; first it's women's dresses at a party, then people's bodily organs, and, eventually, God looking back at him from the center of the universe. Attractive Dr. Diane Fairfax (Diana Van Der Vlis) is Xavier's love interest, though he can't stop seeing through things long enough to notice her--he can't even sleep since he can see through his own eyelids. When he accidentally kills a fellow doctor, Xavier winds up at a carnival sideshow where he performs fortune-telling and faith healing for a sleazy barker (Don Rickles). Later he and Diane head to Vegas, where his see-through card abilities parlay into a small fortune, but then he's on the run again, going progressively more insane as the visions get too much to bear. An insightful script, a moody Les Baxter score, and Milland's tortured performance amply compensate for the film's low budget, and there's a twisted shock ending. It's considered an intellectual peak in B-movie maestro Roger Corman's vast canon, with cheap but engaging "X-ray" optical effects that anticipate his later psychedelic freak-out THE TRIP.

Dr. Xavier is a scientist who develops a serum that he applies to his eyes to give him the power to see what no man can see, even through solid objects. Soon he can see through walls, clothes, and even flesh. But when his X-ray vision becomes uncontrollable, his life becomes a living nightmare. This horror favorite from director Roger Corman features a supporting turn by comedian Don Rickles.

16%off
The Incredible Shrinking Man
$8.40 Super Savings
Add to Cart

It! The Terror from Beyond Space (Blu-ray)
$26.40 Super Savings
Add to Cart

The Thing from Another World (Blu-ray)
$20
Add to Cart