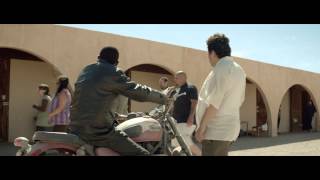 A.V. Club - 03/05/2015
"French director Rachid Bouchareb’s career-long preoccupation with conflicting cultural values gets one of its more enigmatic workouts in TWO MEN IN TOWN, a minimalist remake of the not-quite-classic crime flick of the same title." -- Grade: B
RogerEbert.com - 03/06/2015
"The suspense is spiced up here by the culture clashes implicit in the environment and explicit in some of the characterizations."
New York Times - 03/05/2015
"Forest Whitaker, as shrewd and graceful as ever, conveys William’s infinite sorrow and simmering anger."

After 18 years in prison, a man (Forest Whitaker) emerges with a newfound Islamic faith and a desire to live honestly. He faces opposition from the county sheriff (Harvey Keitel), and is pushed to the breaking point by his former gang of criminals while adjusting to life on the outside.