The Frog brothers are back for blood 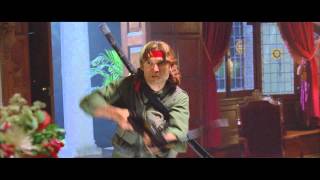 As the lost boys and girls of San Cazador prepare to party under the Blood Moon, an alpha vampire conspires to turn these unsuspecting ravers into an army of undead. The only thing that stands between him and the annihilation of the entire human race is the infamous vampire fighting Frog Brothers. Armed with double-barrel holy water balloon launchers and multi-arrow crossbows, Edgar (Corey Feldman) and Alan Frog (Jamison Newlander) join forces to kick some blood-sucker butt in this latest high-energy, action packed adventure in the Lost Boys franchise.

When an ambitious alpha bloodsucker disguises vampire blood as a designer drug in a bid to claim the entire planet in the name of the undead, it's up to Edgar (Corey Feldman) and Alan Frog (Jamison Newlander) to fight for the future of the entire human race. As the Blood Moon shines brightly in the midnight sky, the fearless vampire killers leap into action armed with enough tailor made weaponry to blast the demonic beasts into oblivion.

47%off
Howling III: The Marsupials
$3.18 Winter Sale
Add to Cart

20%off
The Finest Hours
$12 Super Savings
Add to Cart