A movie star goes to her ancestral castle and encounters a family of vampires in this raunchy horror comedy. Part of the Alpha Video "Retrograde" collection featuring retro cover art. Includes collectible postcard! 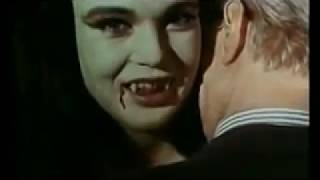 Filled with torture chambers and mantraps, the Transylvanian castle of Baroness Catali has lain empty for fifteen years. When American actress Betty Williams, heir to the manor, arrives to claim her inheritance, she learns of the gruesome fate that befell her grandmother - found murdered in her bed, naked with her neck punctured. As the actress settles in, the undead Baroness emerges from her tomb with an unquenchable thirst for blood. Striking first at the nearby seminary, the vampiress quickly devours the men of the town. Newly-converted vampire monks and Catholic schoolgirls run amok through the streets, sinking their teeth into every available victim. The action climaxes in a debauched undead orgy, where Betty must either join Dracula's legions or fight for her life. Originally released in West Germany as Gebissen Wird Nur Nachts, The Vampire Happening infuses the horror genre with bawdy humor - both absurd gags and subtle in-jokes for vampire buffs. This lusty film was conceived by Italian producer Pier Caminneci, who cast in a dual role his beautiful wife Pia Degermark (Elvira Madigan) as the attractive American as well as the bloodthirsty Countess. Freddie Francis, veteran British director of such films as Evil of Frankenstein and Dr. Terror's House of Horrors, went on to wide acclaim as the cinematographer of David Lynch's The Elephant Man.

Interview with the Vampire
$6.50
Add to Cart