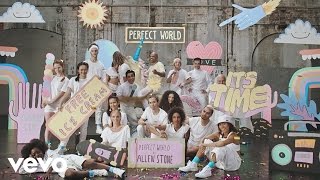 Illustrator: Tara Lawson.
Photographer: Jeff Forney.
Radius is the follow-up to a self-titled release, Allen Stone's second album, which was released independently and then given wider distribution in 2012 through the ATO label. This is the first album he has created within the major-label system. Made with Tingsek, a Swedish jack of many trades Stone has long admired, it's a significantly slicker and less rollicking update of the retro-soul/roots rock hybrid that preceded it. This is most apparent in one of the singles, "Freedom," a tight romper much closer to Maroon 5 than anything filed in an old record store's R&B section. Subtract the studio sweetening -- the overdubs, the hints of perfectionism, the few concessions to contemporary pop -- and the songs tend to have the same pleasant, spirited, past-rooted foundation. Stone still often comes off as an affable everyman, one just trying to find his way in the world, one who thinks you should just be who you are, and he remains dedicated to making it known that he has soul and is authentic. In "Fake Future," however, Stone isn't so easygoing; he's a "hippie with soul" and an ax to grind. He jabs at electronic dance music with one of his earnest attempts at replicating '70s soul/funk sounds and implores "Chuck your laptops" and "Chuck your glitter, you glittery shites," among other things. ~ Andy Kellman