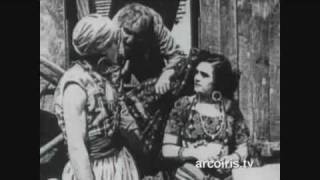 In the early 1920s, Ernst Lubitsch was among Germany's leading directors and one of the few European filmmakers to consistently find success at the American box office. Sumurun, originally released in the U.S. under the title One Arabian Night, was among his greatest triumphs and helped secure his invitation to Hollywood.

This exotic spectacle stars Jenny Hasselqvist (The Saga of Gosta Berling) as Sumurun, a rebellious member of a harem who has committed the greatest of sins: she has rejected the old sheikh and instead fallen in love with a charming cloth merchant. Lubitsch expertly interweaves Sumurun's tale with several other related stories, and the result is a wonderful blend of melodrama and comedy. The cast also includes screen legend Pola Negri (Forbidden Paradise) as a traveling dancer who is drawn to both the harem and to the sheikh's handsome son, famed director-actor Paul Wegener (The Golem) as the tyrannical, lecherous old sheikh, and Lubitsch himself as a hunchbacked clown in love with Negri.

Sumurun was based on a pantomime act that had been a popular success for Lubitsch's mentor, the theater director Max Reinhardt. The New York Times labeled the film "an exceptional production," and Lewis Jacobs, in his book The Rise of the American Film, wrote that Sumurun "not only revealed Lubitsch as an ingenious director of comedy, but introduced a risque wit that killed the heavy-handed American sex and style displays. This film presaged the flock of films Lubitsch was to make in America and was to have a lasting influence on American productions generally."

Ernst Lubitsch's 1920 feature was first released in the U.S. under the name ONE ARABIAN NIGHT. An elaborate blend of romance, melodrama, comedy and spectacle, this spellbinding tale stars Jenny Hasselqvist as a delinquent harem member.

That Lady in Ermine
$19
Add to Cart