Shoshone tribesman and Civil War hero Lance Poole returns home with a Congressional Medal of Honor and a saddlebag full of dreams about prospering as a cattleman on his family's land. But American Indians have no citizenship, no property rights. 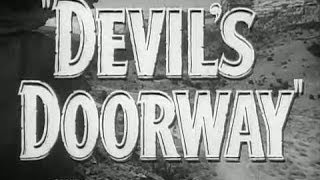 Shoshone tribesman and Civil War hero Lance Poole (Robert Taylor) returns home with a Congressional Medal of Honor on his chest and a saddlebag full of dreams about prospering as a cattleman on his family's land. But American Indians have no citizenship, no property rights. The courts, despite the efforts of Lance's attorney (Paula Raymond), offer no remedy. Lance and his people must fight to keep their land. Devil's Doorway, the first of the dozen or so groundbreaking Westerns by filmmaker Anthony Mann (Winchester '73), is one of the earliest films sympathetic to Native Americans, standing alongside the same year's Broken Arrow. Perhaps not coincidentally, Lance Poole's tribal name is Broken Lance.

DEVIL'S DOORWAY was the first of many top-rank westerns directed by Anthony Mann. RobertTaylor is cast against type as a Native American named Lance Poole. Returning to his people's land after the Civil War, Poole discovers that the Indians are being victimized and persecuted--and, thanks to machinations of crooked lawyer Verne Coolan (Louis Calhern), it's all legal. Unable to turn to the Law to protect his tribesmen, Lance becomes what white men call a "renegade." DEVIL'S DOORWAY was the vanguard of a new western cycle of the early 1950s, wherein the Indians were the good guys and the whites the villains. Had it been made 30 years later, it is likely that the star would have been a genuine Native American, rather than a white matinee idol in "redface."

Civil War | Indians | Death | Justice | Race Relations | Injustice | Social Issues | Racism | Native Americans
This product is made-on-demand by the manufacturer using DVD-R recordable media. Almost all DVD players can play DVD-Rs (except for some older models made before 2000) - please consult your owner's manual for formats compatible with your player. These DVD-Rs may not play on all computers or DVD player/recorders. To address this, the manufacturer recommends viewing this product on a DVD player that does not have recording capability.

31%off
A Dangerous Profession
$8.98 CYBER WEEK
Add to Cart