Red Skelton headlines a joyful Technicolor remake of Roberta as a New York producer who inherits a failing Parisian fashion house. His partners are Howard Keel and Gower Champion and the lovelies are Kathyrn Grayson, Ann Miller and Marge Champion. 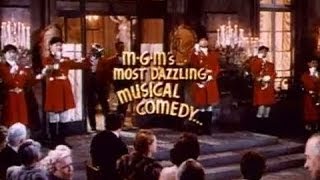 This season in Paris, Red is all the rage! Red Skelton headlines a joyful Technicolor remake of Roberta as a New York producer who inherits a failing Parisian fashion house. His partners are Howard Keel and Gower Champion and the lovelies they look at are Kathyrn Grayson, Ann Miller and Marge Champion. Which means the zippy story (everyone falls in love with everyone else as they scramble to save the salon) is in masterful hands. But the talent doesn't stop there. Jerome Kern provides 10 classics, including "Smoke Gets In Your Eyes," "Yesterdays," "I Won't Dance" and the title song. And Vincente Minnelli directs the finale, a razzling, dazzling, riotous-with-color Broadway-style fashion show featuring fabulous Adrian couture.

This Cinemascope extravaganza is a awash in color, fabulous choreography, and a tremendous soundtrack, which includes "Lovely to Look At," "You're Devastating," "Yesterdays," "Opening Night," "Smoke Gets in Your Eyes," and several other hits. Comic genius Red Skelton stars as comedian Al Marsh, who has recently inherited half a dress shop from his aunt. Al needs the money to fund a Broadway production, so he convinces his pals Tony and Jerry to come along with him to sell his share in the salon. Arriving in Paris, the three men discover that the salon is in the red and hurtling toward bankruptcy. Marsh's partners turn out to be adorable sisters, and Tony comes up with a grand plan to save the salon--turn it into a singing and dancing fashion review. Like many of the products of the early 1950s, when Hollywood studios strove to differentiate film from the incipient television medium, the strengths of LOVELY TO LOOK AT lie in its garish color and the spectacle of song and dance.

It's pure comic mayhem when an American inherits half-interest in a Paris dress salon. Along with his buddies, they turn Parisian culture inside out and funny side up.
Soon showbiz and romance are in the air as the group organizes a fashion show to raise money.