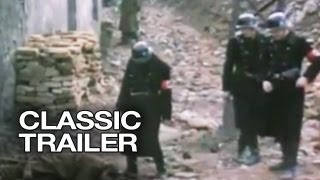 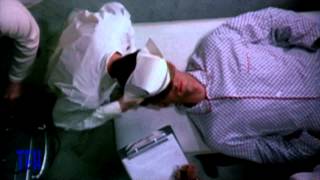 George Roy Hill's adaptation of Kurt Vonnegut's whimsical antiwar black comedy--an immensely popular novel at the time of the film's release because of its implicit condemnation of the war in Vietnam--stars Michael Sacks as the placid Billy Pilgrim. He's become "unstuck in time," as the author describes him, or more prosaically, he's had a nervous breakdown as a result of a recurrence of the trauma of witnessing the horrific Allied firebombing of Dresden in 1945. The desultory narrative has Billy jumping from his war experience to his future on the planet Tralfamadore with the buxom Montana Wildhack (Valerie Perrine), then to an episode of shock therapy, then to an episode in his childhood, and then to his life as a relatively unhappy suburban optometrist. Throughout, the naive Billy remains a curious mixture of kindness and detachment, the best combination of qualities one could have, the author seems to imply, for surviving in a world of meaningless suffering. Vonnegut's novel may be unfilmable, and Hill may have been too cautious a choice as director, but he does a good job of conveying many of the qualities of the author's elusive style. Michael Sacks possesses the requisite air of innocence for his role, and Ron Liebman gives a great performance as a choleric fellow G.I.

An aimless bumbler is pushed into service during World War II and later winds up in a German prison camp known as Slaughterhouse 5 . But his life takes a strange turn when the ties that bind him to normal time and space loosen. Flipping from the war to an extraterrestrial zoo, the hapless hero sees different phases of his life but never quite understands what is expected from him.