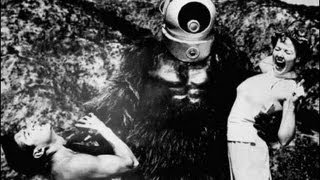 Joe Dante on MONSTER FROM MARS (AKA ROBOT MONSTER) (Featurette)

Following a devastating nuclear war, a gorilla wearing a dime store diving helmet arrives to wipe out the few surviving humans. The petulant primate communicates with its home planet by talking to a bubble blowing machine. One of the world's worst movies.

Ro-man, an emotionless robot with a devastating death ray, lays waste Earth's human population. A lone scientist develops an antidote to the monster's annihilating ray and manages to protect his wife, children and assistant.
Ro-man, following alien orders, hunts them down one by one. Earth's last six survivors with valor battle against the awesome powers and brute strength of a guy in a gorilla suit with a silver diving helmet on his head.

23%off
First Spaceship on Venus
$6.90 Super Savings
Add to Cart