Impeccably mannered Lord Philip Rexford and American socialite Mary meet on their way to a costume ball, skip the soiree and fall in love. Mary becomes Lady Rexford, and the former party girl mends her ways - until she runs into an old flame. 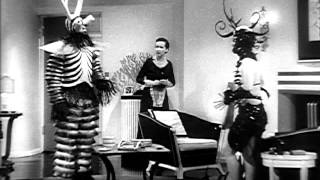 Can an Insect Man and a Lady Sky Bug find happiness together? Impeccably mannered Lord Philip Rexford and vivacious American socialite Mary think so. They meet garbed as anthropods on their way to a costume ball, skip the soiree and fall in love. Soon, Mary becomes Lady Rexford, and the former party girl mends her ways - until she runs into an old flame in Cannes. Several cocktails later, something almost happens. But Philip doesn't believe the almost. Norma Shearer, Robert Montgomery and Herbert Marshall each take one side of a love triangle in this glossy romantic comedy directed with panache by Edmund Goulding (Grand Hotel, Dark Victory). Enriching the love-among-the-rich fun: Mrs. Patrick Campbell, for decades the belle of the London stage, as jaunty Aunt Hetty.

MGM producer Irving Thalberg cast his wife, Norma Shearer, in this witty film after she had been away from acting for two years. She's astonishingly sexy and sophisticated, wearing more than one very revealing gown which only pre-code production values would have permitted. Shearer plays Mary, a fast-living New York socialite who impulsively weds a reserved British Lord (Herbert Marshall) after they meet in bizarre insect costumes en route to a party. For five years they have a happy life in England, but when he goes away on business she winds up in Cannes on vacation with a smooth-talking playboy (Robert Young). A scandal erupts, raising questions about her past that throws their love--and their marriage--into jeopardy. Soap maestro Edmund Goulding (DARK VICTORY, GRAND HOTEL) directed this racy 1930s classic from his own screenplay, revealing a great flair for balancing screwball comedy with domestic drama.

The reappearance of an old flame complicates the staid marriage of a lively chorus girl to a cold British diplomat.

Smilin' Through
$20
Add to Cart