The longer you wait, the harder it gets 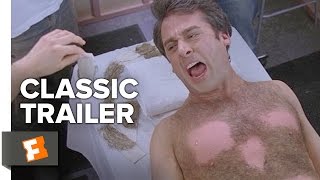 Andy Stitzer (Steve Carell) rides his bike to his stockperson job at Smart Tech, has a nice apartment filled with collectable toys (in their original packages), and plays videogames every night before bed. He's also a 40-year-old virgin. During a poker game with his coworkers David (Paul Rudd), Jay (Romany Malco), and Cal (Seth Rogen), talk turns to sex and it becomes very clear that Andy doesn't know what he's talking about. His friends become intent on remedying his situation, and their advice leads to newfound confidence for naïve Andy. But when he develops true feelings for single mother Trish (Catherine Keener), Andy finds that all the sex advice in the world won't help him navigate the choppy waters of an adult relationship.

In Andy, Carrell has found a perfect comic creation who is hilarious, lovable, and rooted in reality. Rudd, Malco, and Rogen are also perfectly cast as Andy's cheerleaders. The script, by Carrell and first-time director Judd Apatow (producer of TV's FREAKS AND GEEKS), is consistently funny, and--despite its relentless crudity--treats its nerdy protagonist with the utmost respect. This rare quality and its high laugh-to-joke ratio make VIRGIN one of the most enjoyable comedies of the decade.