You lose some, you get some. 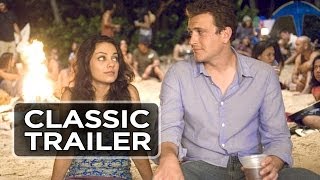 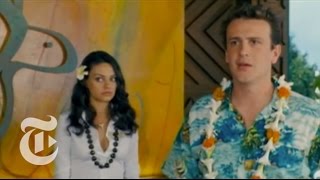 Nicholas Stoller's FORGETTING SARAH MARSHALL is a romantic disaster comedy produced by the same team that made such hits as THE 40-YEAR-OLD VIRGIN and KNOCKED UP, headed by writer, director, and producer Judd Apatow. When he gets suddenly and unceremoniously dumped by his longtime girlfriend, television star Sarah Marshall (VERONICA MARS lead Kristen Bell), composer Peter Bretter (FREAKS AND GEEKS alum Jason Segel) is devastated. Miserably depressed, he seeks solace in tawdry one-night stands, but he is desperate to win Sarah back. On the advice of his stepbrother, Brian (SATURDAY NIGHT LIVE's Bill Hader), Peter heads off to Hawaii for a much-needed vacation, but he gets even more freaked out when he discovers that Sarah and her new beau, wild and wacky British singing sensation Aldous Snow (comedian Russell Brand), are staying there as well. Mired in sadness, Peter is befriended by hotel employee Rachel Jansen (THAT '70S SHOW's Mila Kunis), who encourages him to get back his life and pursue his own dreams, which include staging a Dracula musical with puppets. But Peter is blinded by his desire for Sarah even as he grows closer to Rachel and starts hanging out with some of the hotel's odder personalities, including Chuck (Paul Rudd), a drug-addled surf instructor, and Matthew (SUPERBAD's Jonah Hill), a drug-dealing restaurant worker obsessed with Snow. Segel, who gets fully naked several times in the film, wrote the screenplay, a sharp blend of comedy and drama, and is solid in his first major starring role. Stoller, making his feature-film directorial debut, gets the most out of his diverse cast and beautiful setting, especially Jack McBrayer and Maria Thayer as a newlywed couple having some bizarre sexual problems, and Billy Baldwin as Sarah's costar in the television show CRIME SCENE: SCENE OF THE CRIME. FORGETTING SARAH MARSHALL is an outrageously funny yet touchingly sweet movie.