Party till you drop. Dead. 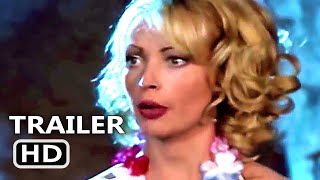 A mischievous beach-fest in the style of old 50s, 60s, and 70s thriller-beach party-slasher movies, Malibu-based PSYCHO BEACH PARTY follows a nearly invisible plot. Chicklet Forrest (Lauren Ambrose) is a wanna-be surfer girl with multiple personalities. When a series of murders takes place on the beach, Chicklet is a prime suspect, and Captain Monica Starck (Charles Busch in drag) arrives to interrogate the remaining set of eccentric beach-going revelers.

PSYCHO BEACH PARTY was scripted by playwright Charles Busch (author of the long-running off-Broadway hit VAMPIRE LESBIANS OF SODOM), adapted from his 1987 play of the same title. Florence Forest (Lauren Ambrose) is a perky but unfulfilled teen. After witnessing the antics of a gang of strapping young surfer dudes at the beach one day, she decides surfing's the thing for her, and asks the group leader, the "Great Kanaka" (Thomas Gibson), to give her lessons. But Kanaka won't give Florence (or rather "Chicklet," as she is soon dubbed by the boys) the time of day--until her alter ego, S/M dominatrix Ann Bowman, unexpectedly makes an appearance. Meanwhile, a mysterious killer is offing the town's teens one by one. Detective Monica Stark (played by Busch himself) is on the case, but soon her investigation is complicated by an overabundance of suspects: Could the killer be Florence's frustrated mom, who disapproves of the company her daughter's been keeping' There's also B-movie babe Bettina Barnes (Kimberley Davies), in town incognito after running away from her studio. And then, of course, there's schizophrenic Florence herself. Expertly mimicking the corny, frantically upbeat tone of 1960s teen flicks, PSYCHO BEACH PARTY is a campy (and occasionally raunchy) alternative treat.