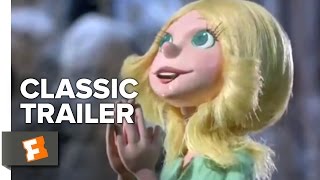 A groundhog (Buddy Hackett) narrates this stop-motion animation masterpiece about the gift of love and the joy of being generous to others. Jack Frost (Robert Morse), the darkhearted spirit of winter, has fallen in love with a beautiful maid, Elisa (Debra Clinger). Wishing to win her over, Jack takes the form of a human and befriends Elisa and her family. Working as a tailor, Jack becomes a regular part of his community, and just when he thinks he's reaching Elisa, he learns that she is already engaged to marry the noble knight Sir Danny (Larry Storch). However, before Jack can lament the loss of Elisa, the evil King Kubla Kraus (Paul Frees) comes along and snatches her up, locking her away in his castle. When Elisa refuses to marry Kraus and pledges her allegiance to Sir Danny, the all-powerful Kraus vows to destroy the village. Jack realizes that he is the only one powerful enough to stop the evil king, but he can only stage such a rescue if he returns to his immortal winter form.

Directors Jules Bass and Arthur Rankin return with another masterpiece. Jack Frost features all the elements Rankin and Bass fans have come to love--a fairy-tale story line, catchy songs, and breathtaking animation. Featuring the pop standard "Me and My Shadow" and the jibing voice of Hackett, JACK FROST is anything but cold.