Steven Kenet says he killed his wife, but even he doesn't really know. A wartime head trauma has left him subject to disorientations and blackouts. So he enters a psych ward where, the DA asserts, he'll hide behind the wall of an insanity plea. 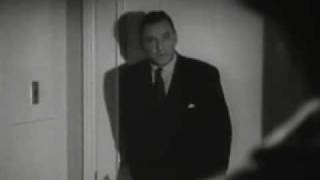 Steven Kenet (Robert Taylor) says he killed his wife, but even he doesn't really know. A wartime head trauma has left him subject to disorientations and blackouts. So Kenet enters a psych ward where, the DA asserts, he'll hide behind the wall of an insanity plea. But truth cannot hide. And Kenet - assisted by a ward doctor (Audrey Totter) - is driven to find that truth. With bravura use of genre trademarks like expressionist shadows and subjective camera, director Curtis Bernhardt (Possessed) builds a High Wall into a film noir psychological thriller that, little noted its day, is ready for an honored place amid the shadowy shrines of noir. Go behind the wall into the inner sanctum of noir and consciousness.

Former army pilot Robert Taylor is accused, on the basis of strong circumstantial evidence, of his wife's murder. Suffering from periodic blackouts, Taylor isn't so certain of his innocence himself. When offered a brain operation, Taylor refuses, knowing that if he is proven sane he will be executed for murder. Instead, he opts for confinement in a high-walled veteran's mental institution. A compassionate lady doctor (Audrey Totter) falls in love with Taylor, convincing him to have the operation. Even after emerging from the ether, Taylor cannot remember any of the details concerning his wife's death--but he does recall that the dead woman had recently taken a job with a publisher (Herbert Marshall) of religious books. While the killer's identity is tipped off by this revelation, the audience is never certain that Robert Taylor isn't a murderer--especially since he'd previously appeared as a homicidal maniac in the 1946 film UNDERCURRENT. The best moment in HIGH WALL is the casual disposal of the sole witness to the murder, via a long, dark elevator shaft.

Drugs | Death | Mystery | Thriller | Murder | Film Noir | Escape | Affairs | Air Force | Cars / Automobiles
This product is made-on-demand by the manufacturer using DVD-R recordable media. Almost all DVD players can play DVD-Rs (except for some older models made before 2000) - please consult your owner's manual for formats compatible with your player. These DVD-Rs may not play on all computers or DVD player/recorders. To address this, the manufacturer recommends viewing this product on a DVD player that does not have recording capability.