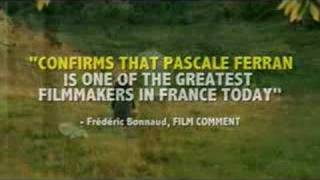 French director Pascale Ferran brings D.H. Lawrence's second and lesser-known version of LADY CHATTERLEY'S LOVER to the screen. Approaching three hours in length, the film moves at an achingly slow pace as it explores its protagonist's emotional transformation. Set in England in the 1920s, the film begins with our heroine, played by Marina Hands, saying goodbye to her husband, Clifford, who is heading off to war. Left behind on their grand country estate, Constance gets the first taste of the loneliness and isolation she will later become accustomed to when he returns home paralyzed. Suddenly reduced to the role of nurse, the young woman cares for her invalid husband and listlessly putters about the large property, desperately dreaming of escape. She finds this outlet in Parkin (Jean-Louis Coulloc'h), the deceptively brutish gamekeeper down the hill. Skeptical of Constance at first, Parkin begrudgingly produces an extra set of keys to his shed when asked, opening the door to an affair that will awaken something deeply repressed in both parties. Clifford inadvertently encourages his wife by dismissing her boredom and unhappiness as unimportant. When the unspoken tension between Parkin and Constance eventually explodes into a fiery sexual encounter, the two embark on a journey of sexual awakening and personal discovery.

LADY CHATTERLEY is beautifully filmed, providing an extremely detailed account of the heroine's visual surroundings. Scenery functions symbolically to show how Constance blooms in the aura of Parkin's love. But as passionate and subversive as their affair is, the reality of their social positions is always present, with visual clues creating a sense of constant threat to the relationship. When Constance goes off on a carefree, extravagant vacation with her fashionable sister and others from her own class, homemade-style footage of her trip contrasts with the controlled way in which her home life is captured, and demonstrates just how far she is from that world. The film's ending is rather open-ended, suggesting several possible outcomes by calling into question how much the early-20th-century social structure will matter in the end.