The Adventures of Robin Hood PG

Excitement... Danger... Suspense... as this classic adventure story sweeps across the screen! 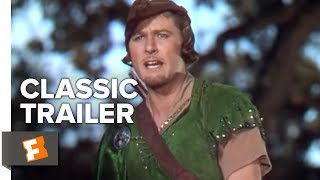 In Michael Curtiz's swashbuckling spectacle about the infamous outlaw and his band of merry men who "robbed from the rich and gave to the poor," Robin Hood (Errol Flynn) fights nobly for justice against the evil Sir Guy of Gisbourne (Basil Rathbone) while striving to win the hand of the beautiful Maid Marian (Olivia de Havilland).

Flynn joyously embraces the role widely considered the best of his bountiful array of swashbuckling legends. Delivering his lines and performing dashing acrobatics (he did most of his own stunts) with breezy élan, he darts across the intricate sets of THE ADVENTURES OF ROBIN HOOD as if there are rocket boosters secreted in his tights. It was one of the earliest films to use three-color Technicolor and, at the time, the most expensive film Warner Bros. had produced. Erich Wolfgang Korngold's outstanding score won an Oscar, as did the art direction and the editing.

22%off
The Story of Robin Hood and His Merrie Men
$11.70 Super Savings
Add to Cart