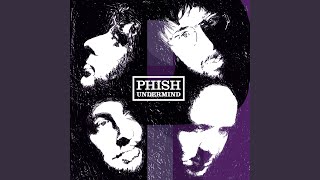 Rolling Stone - p.128
4 stars out of 5 - "UNDERMIND is giddily adventurous. The album's fourteen tracks run from the simple, stripped-down psychedelia of the opening 'Scents and Subtle Sounds' to the joyous rock of 'Crowd Control'..."
Rolling Stone - p.150
Included in Rolling Stone's Top 50 Records Of 2004 - "[O]ne of their best studio albums, song-wise and jam-wise..."
Entertainment Weekly - p.84
"All warm-fireplace harmonies and jaunty beats..." - Grade: B-

Initial pressings of UNDERMIND included a bonus DVD.
Phish: Mike Gordon , Jonathan Fishman, Page McConnell, Trey Anastasio.
For years, Phish (like forebears the Grateful Dead) was dogged by criticism that its studio albums did not capture the band's widely acclaimed on-stage magic. While UNDERMIND, the group's final effort (the quartet officially disbanded in May 2004), may not completely silence the naysayers, the record's unquestionably accomplished sound does encourage a complete re-assessment of Phish as a recording entity. Producer/engineer Tchad Blake's trademark spare, meaty production gives the band's sonic textures a powerful wallop, evoking the jazz-like muscularity with which the combo imbues its live instrumental jams. In addition, Phish continues a trend started on BILLY BREATHES by focusing on tight, sharp songwriting, the title track standing as one of the group's catchiest tracks ever.
The Vermont foursome's astounding diversity is in evidence too, from the dreamy sunshine pop of "Scents & Subtle Sounds (Intro)" to keyboardist Page McConnell's Southern gospel-drenched "Army of One," to the monstrous, metallic bass riffs that drive "Maggie's Revenge." In the end, UNDERMIND is a fitting swan song and a top-notch studio album by a group that was always a genre unto itself.