Something is driving beautiful women into grotesque acts of self-mutilation, and the police investigation leads to a debonair stage hypnotist and his glamorous assistant, who harbors a deep and deadly secret! 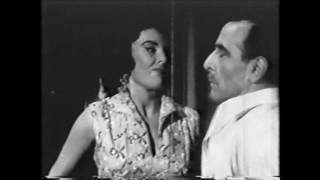 A sulfuric acid facial. A lye cocktail. A close encounter with whirring fan blades. A flammable shampoo and a lit gas burner. Something is driving beautiful women into grotesque acts of self-mutilation - and the police investigation leads to a debonair stage hypnotist and his glamorous assistant, who harbors a deep and deadly secret! Allison Hayes (Attack of the 50 Ft. Woman) and Jacques Bergerac (Gigi) star in a nerve-frying horror flick that combines quasi-science with beatnik culture and a women-in-peril storyline. An extra for '50s horror fans: Hypnomagic, a get-'em-into-the-theater gimmick that gives you, the viewer, "the opportunity to cross the dark, mysterious threshold of your own unconscious mind." Beware!

A curious "gimmick" movie in the William Castle tradition (though not itself a Castle project), screenings of this film featured a hokey but creative "Hypno-Magic" process allegedly designed to hypnotize the theater audience. The otherwise mundane psycho-thriller plot features Jacques Bergerac as stage mesmerist "The Great Desmond," whose act includes hypnotizing entire audiences into performing rather dull Simon-says maneuvers and such. The real trick, it turns out, involves Desmond's Svengali-like seduction of his more comely female patrons -- most of which end up horribly disfigured the next morning, the victims of apparent self-mutilation. Thanks to several scenes hinting at the obvious hatred Desmond's wife and assistant, Justine (Allison Hayes), harbors toward her husband's pretty subjects, there's not much of a mystery here. Nevertheless, the police are baffled, leading one victim's best friend to set herself up as bait and trap the guilty party -- whose secret is revealed in the "shocking" climax. The Hypno-Magic gimmick, though certainly ineffective, provides some of the film's more hilarious diversions, and thoroughly disarms any potential for suspense.

Cult
This product is made-on-demand by the manufacturer using DVD-R recordable media. Almost all DVD players can play DVD-Rs (except for some older models made before 2000) - please consult your owner's manual for formats compatible with your player. These DVD-Rs may not play on all computers or DVD player/recorders. To address this, the manufacturer recommends viewing this product on a DVD player that does not have recording capability.

25%off
Terror Creatures From The Grave
$5.95 CYBER WEEK
Add to Cart

Chandu the Magician
$19
Add to Cart