They have four weeks to find happiness in each other's arms. Dan does not know that Joan is dying of an incurable disease. Joan does not know Dan is a convicted murderer en route to San Quentin. This shipboard romance is doomed. 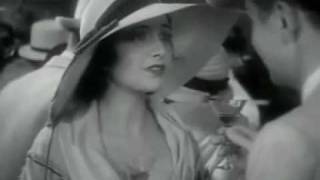 The seas are calm and the ship is sturdy - but the shipboard romance is doomed. Dan does not know that Joan is dying of an incurable disease. Joan does not know Dan is a convicted murderer en route to San Quentin. Still, they have four weeks to find happiness in each other's arms. Or will Dan forsake the love of a lifetime for his own life, using the vessel's Honolulu layover as a chance to escape the law? The passage of time remains kind to One Way Passage, an Academy Award winner for Best Original Story directed with style and sensitivity by Tay Garnett (The Postman Always Rings Twice). William Powell brings unmatchable urbane charm to the role of Dan. As Joan, Kay Francis displays the lustrous sincerity that made her one of the era's favorites. Their passage may be one-way. But you'll find it's a voyage worth repeating.

William Powell plays a condemned murderer who is being transported from Hong Kong to San Quentin by way of a luxury liner. Also on board is the lovely Kay Francis, who is suffering from a fatal heart condition. The sympathetic detective (Warren Hymer) escorting Powell allows the prisoner to roam the decks without handcuffs, an opportunity Powell exploits by arranging an escape with two of his old cronies (Frank McHugh and Aline MacMahon). But when he meets Francis, Powell falls in love. Francis is equally smitten, and the two conduct an exquisite shipboard affair, neither telling the other of their impending doom. Powell makes his escape, but is halted in mid-flight when Francis has a heart attack. He rushes Francis back on board ship to her doctor, knowing full well that this will mean his recapture. As they bid goodbye, Powell and Francis promise to meet again one year later in Agua Caliente--a rendezvous that neither will survive to keep. A year passes. At a bar in Agua Caliente, two cocktail glasses suddenly shatter, as if having been joined in a toast by unseen hands. ONE WAY PASSAGE was remade in 1940 as 'TIL WE MEET AGAIN.

Death | Romance | Escape | Doomed Lovers | Melodrama | Romances | Love
This product is made-on-demand by the manufacturer using DVD-R recordable media. Almost all DVD players can play DVD-Rs (except for some older models made before 2000) - please consult your owner's manual for formats compatible with your player. These DVD-Rs may not play on all computers or DVD player/recorders. To address this, the manufacturer recommends viewing this product on a DVD player that does not have recording capability.

22%off
Pirates of the Caribbean - Dead Men Tell No Tales
$11.70 Super Savings
Add to Cart