Career thief Earl Macklin (Duvall) intends to put a big hurt on an L.A crime outfit. He, his girlfriend and his partner will avenge the murder of Macklin's brother by cutting down gangland operations bit by violent bit. 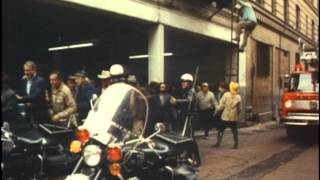 "You know how it is. You hit us. We hit you." Career thief Earl Macklin (Robert Duvall) pays no mind to the mobster's threat. He intends to put a big hurt on an L.A crime outfit. He, his girlfriend (Karen Black) and his partner (Joe Don Baker) will avenge the murder of Macklin's brother by cutting down gangland operations bit by violent bit. Based on the novel by Point Blank author Richard Stark, The Outfit has a feel and grit that makes it a throwback to film noirs of the 1940s and '50s. The casting of noir veterans underscores the tone: Robert Ryan, Jane Greer, Marie Windsor, Timothy Carey and Elisha Cook. Hollywood buffs will also enjoy seeing longtime Variety columnist Army Archerd in a bit role.

A two-bit criminal takes on the Mafia to avenge his brother's death in this drama based on a novel by Donald E. Westlake. Earl Macklin (Robert Duvall) is a small time criminal who is released from prison after an unsuccessful bank robbery only to discover that a pair of gunmen killed his brother. As it turns out, the bank that Earl and his brother hit was controlled by gangster Mailer (Robert Ryan). Macklin learns that he's on the mob's hit list as well, so he teams up with his old partner Cody (Joe Don Baker) to take on Mailer and his second in command, Jake Menner (Timothy Carey). THE OUTFIT also features a top-notch supporting cast, including Karen Black, Sheree North, Joanna Cassidy, Richard Jaeckel, and Anita O'Day; Marie Windsor and Elisha Cook, Jr. also appear, 18 years after their memorable turn together in THE KILLING.

Thriller | Crime | Mafia | Brothers | Revenge | Criminals
This product is made-on-demand by the manufacturer using DVD-R recordable media. Almost all DVD players can play DVD-Rs (except for some older models made before 2000) - please consult your owner's manual for formats compatible with your player. These DVD-Rs may not play on all computers or DVD player/recorders. To address this, the manufacturer recommends viewing this product on a DVD player that does not have recording capability.