Don't spill the beans about beautiful Ruth Vincent being the governor's daughter and the secret bride of the DA who's investigating her father's bribery charge, or he might be yanked off the case before he can find evidence to clear Dad's name. 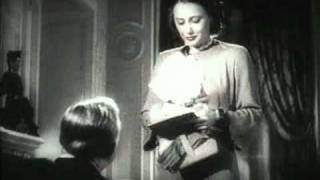 Shhhh. Don't spill the beans about beautiful Ruth Vincent (Barbara Stanwyck), the governor's daughter. Don't reveal that she's the secret bride of the DA who's investigating her father on a bribery charge, or he might be yanked off the case before he can find evidence to clear Dad's name. And don't let on that Ruth is risking her lovely neck to do some sleuthing on her own! Draped in furs and dripping with mystery, Stanwyck is every inch a cinema queen in this crisply paced combination of whodunit, courtroom drama and political thriller. William Dieterle (The Life of Emile Zola) directs, and two standouts in memorable '30s films costar: Warren William (the Perry Mason series) and Glenda Farrell (the Torchy Blane series).

THE SECRET BRIDE is Ruth Vincent (Barbara Stanwyck), the daughter of Governor Vincent (Arthur Byron). Attorney general Robert Sheldon (Warren William) falls in love with Ruth and they marry, but Sheldon insists that their marriage be kept secret. It seems that the Governor has been accused of accepting $10,000 in bribes, and Sheldon doesn't want to be accused of complicity while he investigates the matter. In the course of events, two murders occur, and it's up to Ruth to straighten the mess out. But how will she be able to manage this without involving herself or her secret husband in the scandal'

Prison / Prisoners | Murder | Melodrama | Marriage | Corruption | Scandal | Crime
This product is made-on-demand by the manufacturer using DVD-R recordable media. Almost all DVD players can play DVD-Rs (except for some older models made before 2000) - please consult your owner's manual for formats compatible with your player. These DVD-Rs may not play on all computers or DVD player/recorders. To address this, the manufacturer recommends viewing this product on a DVD player that does not have recording capability.