The Man with a Cloak
Warner Archive Collection (series)

A spirited demoiselle is determined to save her fiance's grandfather from his malevolent - and possibly homicidal - servants. A cloaked stranger comes to her aid as the plot turns from suspicion to murder to the hunt for a missing will. 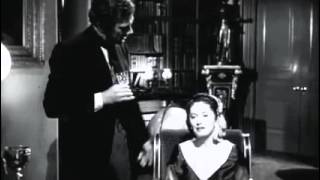 Man with a Cloak, The Original Trailer

Stellar talents Barbara Stanwyck, Joseph Cotton, Leslie Caron and Louis Calhern bring shuddery believability to this literate, deliciously creepy tale set in 1848 New York. The story follows a spirited demoiselle (Caron) determined to save her fiance's grandfather from his malevolent - and possibly homicidal - servants. Fortified with glass after glass of on-the-cuff wine at a local tavern, an urbane, cloaked stranger comes to her aid. The gentleman displays keen detecting skills as the plot turns from suspicion to murder to the hunt for a missing will. But one thing he does not reveal: his own identity. Surrender yourself to mystery. And a cask of amontillado if you can guess who is The Man with a Cloak.

Set in 19th-century New York, this mystery begins when a Frenchwoman shows up at the home of one of Napoleon's former marshals. The alcoholic man is badly crippled and slowly dying, but this doesn't stop the forthright lady from pushing him to change his will to include his estranged grandson so that he can help out the struggling French Republic. Unfortunately, the dying man's conniving housekeeper and butler, already planning murder to get the money themselves, overhear her and begin plotting her demise.

Mystery | Murder
This product is made-on-demand by the manufacturer using DVD-R recordable media. Almost all DVD players can play DVD-Rs (except for some older models made before 2000) - please consult your owner's manual for formats compatible with your player. These DVD-Rs may not play on all computers or DVD player/recorders. To address this, the manufacturer recommends viewing this product on a DVD player that does not have recording capability.