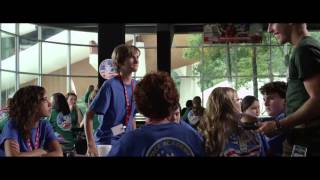 Space camp serves as a proving ground for a group of bright youths who use their knowledge of science and astrophysics to rescue astronauts stranded on the International Space Station following an unexpected crisis. For as far back as he can remember, Jimmy Hawkins (Thomas Horn) has dreamed of exploring the stars and visiting the International Space Station, just like his father, retired NASA astronaut Capt. Andy Hawkins (Dermot Mulroney). Space travel is no child's game, however, and Jimmy, a bright young astrophysics whiz, knows that both of his parents have serious reservations about his deep-rooted desire to follow in his father's footsteps. After furtively applying to win a seat on the next space shuttle, Jimmy learns that he has been accepted into a prestigious space camp run by Col. Roy Manley (Josh Lucas). Once there, Jimmy and a team of teens called the Warriors enter into a heated rivalry against the highly competitive Titans. The Warriors are just about to admit defeat when an emergency aboard the International Space Station leaves three astronauts isolated and alone hundreds of miles above Earth. With the fates of the helpless astronauts hanging in the balance, Jimmy and his team hatch an innovative rescue plan that impresses Commander Phillips (Danny Glover), and offers newfound hope for the future of space exploration.

Flight of the Navigator
$5.80 Super Savings
Add to Cart

81%off
Molly Moon and the Incredible Book of Hypnotism (DVD)
$3.98 on Sale
Add to Cart