Because someone is dead doesn't mean they're gone. 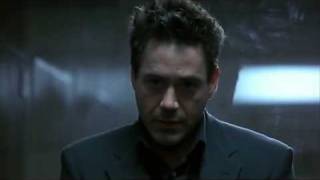 GOTHIKA stars Halle Berry as Dr. Miranda Grey, a psychiatrist who becomes a patient in her own mental hospital after she is accused of murdering her husband (Charles S. Dutton). Grey's only initial memory of the incident involves a chilling encounter with a distraught girl (Kathleen Mackey) on a rain-soaked road. The incarcerated and medicated Grey is now haunted by the same apparition, and she must convince her former colleague Pete Graham (Robert Downey Jr.) that she is not insane or guilty of murder. Meanwhile, the seemingly mad ramblings of Chloe (Penelope Cruz), one of Grey's former patients, now make more sense, and Grey must throw aside clinical logic to solve the supernatural murder mystery.

Kassovitz, who is already a capable actor (AMELIE) and director (CRIMSON RIVERS), makes the leap to Hollywood filmmaking with GOTHIKA. Drawing from heavily from the Japanese horror renaissance that began with RINGU in the late 1990s, Kassovitz conjures up a forebodingly stark and shadowy tale. Berry continues her remarkable string of success (after her Oscar-winning role in MONSTER'S BALL, along with DIE ANOTHER DAY and X-MEN 2), portraying Grey as a traumatized and vulnerable yet determined woman who must unravel the brutal and bizarre knot of her own lost memory. As Grey's coworker, Downey Jr. adds an intriguing element to the film, and Cruz, as a frustrated inmate, gives an unusual quirky performance. A scare-laden thriller that delights in the strange and the frightening, GOTHIKA proves to be one of the finest of 2003's many horror films.