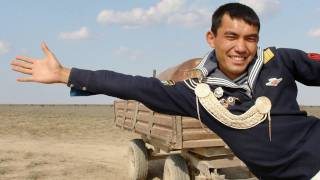 Acclaimed documentarian Sergey Dvortsevoy's debut narrative feature, TULPAN, is a work of extraordinary filmmaking bravado, an exhilaratingly alive and sweet-natured fairytale set in the barren landscape of a Kazakh steppe, an environment where only shepherds live. Asa (Askhat Kuchinchirekov) returns from military service to live with his sister, Samal (Samal Yeslyamova), her husband, Ondas (Ondasyn Besikbasov), and their three children. Asa's dream is to have his own flock of sheep, but his boss tells him that until he gets married, his wish will never be granted. The only trouble is that in this particular case, the candidates for potential wife can be counted on one finger. Her name is Tulpan, and though he's never seen her entire face, Asa is certain that she is the one for him. Unfortunately, she doesn't appear to feel the same way, complaining that his ears are too big. Yet Asa remains hopeful, envisioning the day when his dream will come true.

Dvortsevoy's background as a documentary director is put to masterly use here. He refuses to be anything but authentic, to the point where he captures some of the most miraculous footage the screen has ever seen. The highlight is a transcendent 10-minute lamb birth that occurs in an unbroken take. But this is just one of the many extended shots in which Dvortsevoy appears to be controlling the most difficult to wrangle forces of nature: weather, animals, and children. Four years in the making, TULPAN is filmmaking of the highest order, a Herzogian display of directorial bravado.

Winner of the Prix Un Certain Regard at the 2008 Cannes Film Festival, acclaimed Kazakh documentarian Sergey Dvortsevoy's first narrative feature is a gorgeous mélange of tender comedy, ethnographic drama and wildlife extravaganza. Following his Russian naval service, young dreamer Asa returns to his sister's nomadic brood on the desolate Hunger Steppe to begin a hardscrabble career as a shepherd. But before he can tend a flock of his own, Asa must win the hand of the only eligible bachelorette for miles—his alluringly mysterious neighbor Tulpan. Accompanied by his girlie mag-reading sidekick Boni (and a menagerie of adorable lambs, stampeding camels, mewling kittens and mischievous children), Asa will stop at nothing to prove he is a worthy husband and herder. In the tradition of such crowd-pleasing travelogues as The Story of the Weeping Camel, TULPAN's gentle humor and stunning photography transport audiences to this singular, harshly beautiful region and its rapidly vanishing way of life.

16%off
The Inevitable Defeat of Mister & Pete
$8.40 Super Savings
Add to Cart