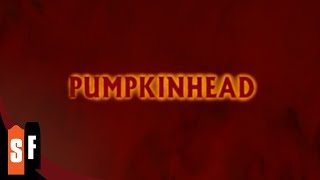 When a gang of bikers run over a child, the child's father invokes the demon Pumpkinhead to seek his revenge, forgetting there is a price for his services. Special effects man Winston (ALIENS, JURASSIC PARK) makes a sparkling debut in this creepy horror effort which features the one of the greatest monsters in recent memory.

Lance Henriksen (Aliens, Millenium ) stars in this vivid, stylish, atmospheric (The Hollywood Reporter) and heart-poundingly scary fright fest directed by four-time Oscar®winner* Stan Winston and written by Mark Patrick Carducci and Gary Gerani. When a group of rambunctious teenagers inadvertently kill his only son, Ed Harley (Henriksen) seeks the magic of a backwoods witch to bring the child back. But when she tells him the child's death is irrevocable, his grief develops into an all-consuming desire... for revenge! Defying superstition, he and the witch invoke 'the pumpkinhead a monstrously clawed and fanged demon which, once reborn, answers only to Ed's bloodlust. But as the invincible creature wreaks its slow, unspeakable tortures on the teens, Ed confronts a horrifying secret about his connection to the beastand realizes that he must find a way tostop its deadly mission before he becomes one with it forever!