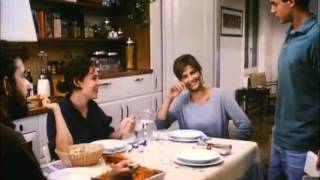 Nanni Moretti's extraordinary drama THE SON'S ROOM, which won the Palme D'Or at the 2001 Cannes Film Festival, tells the harrowing story of a once tight-knit, happy family having to come to terms with a devastating loss and get on with their lives. Nanni Moretti, the writer-director of the charming CARO DIARIO, which was based on his own life, has created this piece of fiction from scratch, but he nails it so well it is hard to believe it is not a documentary. Moretti, who not only stars in and directs the film but is also cowriter and coproducer, plays Giovanni, a happily married man with two wonderful children; he is also a psychoanalyst with a group of patients both hysterical and sad. He enjoys running through the streets of Ancona, but when he opts to make a rare house call one Sunday morning instead of going for a run with his son, tragedy strikes, and he can't help blaming himself and his choices. He starts having trouble listening to and caring about his patients, and he also distances himself from his wife, played magnificently by Laura Morante. One of the underlying themes of the film is the need to make--and break--scheduled appointments that threaten to overtake one's life with its potential for compulsive obsession; as Giovanni dreams of past scenes playing out differently, he can't help but think that if he had rearranged his schedule based on the importance and necessity of his appointments, his idyllic world might not have been turned upside down.

The Son's Room
Declared Best Picture at the Cannes Film Festival, this universally touching film tells the unforgettable story of a man facing the greatest challenge of his life. Giovanni is a psychoanalyst who thought he had all the answers. In contrast to the worries and neuroses of his patients, Giovanni's reassuringly calm existence revolves around the security of his loving family and the comfort of his daily routines. So when an unthinkable tragedy hits his home and turns his life upside down, he must somehow summon the courage to deal with his own grief while giving strength to those who need him most. Released to overwhelming critical acclaim, this ultimately uplifting emotional journey has drawn praise for its subtle realism and remarkable power!

All About My Mother
$18.30 Super Savings
Add to Cart

All About My Mother
$26.10 Super Savings
Add to Cart